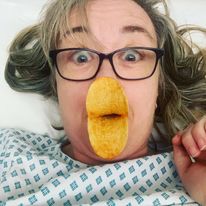 Having waited for nearly 7 weeks to hear the news that I was going to Sheffield (Specialist Spinal Unit), I burst into tears when I finally received the news which felt like all my Christmas’s had come at once!  I was literally elated.  Bizarre, considering I had no idea where and what I was going to, but I just knew it was the right place to be going to get the fullest and best recovery in order to start walking and get home.  I’ve never been to Sheffield in my life. I wasn’t planning to do any sightseeing, but my limited knowledge knew it was a very industrialised city and located not too far from Leeds where my daughter is at uni. I’d heard that the hospital was going to be very different to what I had become used to, a bit like boot camp, which sounded right up my street! My only reservation was how far away I would be from Norfolk which meant I wouldn’t have any visitors other than once a week from Martin.  It did feel a little like I was being sent off to boarding school, but it was exciting…

So, on the 5th September, I was wheeled off from Gately ward after 7 long weeks and after some emotional goodbyes, I had my first feel of fresh air for nearly 2 months and briefly felt the sun on my face before being loaded into a transport vehicle. The journey was a bit of a shock after being handled so delicately.  In fact, it was positively scary being swung around roundabouts and feeling all the bumps in the road at high speed as I lay there on the stretcher gripping the sides with my arms. I could feel every vibration and bump as though my spine were now made of glass!  My catheter bag was clipped to the end of my stretcher (unfortunately) and getting the urge that I needed to pee yet again, I asked my non-communicative assistant on the journey to check the bag. He did this fairly reluctantly and discovered that it had been clipped off which meant it wasn’t draining into the bag which he quickly adjusted.  The journey was awkward as well as uncomfortable so I was relieved 4 ½ hours later when we arrived and I was wheeled onto Osborne ward where I was greeted by 2 nurses with very strong Yorkshire accents welcoming me. It hadn’t even dawned on me they would speak differently. I really did feel far away from home now LOL!

My new home was a small ward with about 30-40 other spinal patients. The rooms either had 2 or 4 beds in, some were even single with their own en-suite! I was put in a room right by the reception, which made me feel safe. Result! I had the room to myself as the other bed was unoccupied. It was much more spacious than the bed space I had been used to, with a single wardrobe as well as drawers, to take whatever clothes had been packed in my bag by Martin! I had my own overhead TV which was FREE?! (I’d not watched any TV at N&N) things were looking good! The food was definitely an improvement and there were even hot breakfasts, I started to feel like I’d checked into a hotel!

I was transferred across to my new bed via a slide board and further differences in the hospitals became apparent immediately! The male and female nurse (I’ll keep the names anonymous) asked me to roll myself to the side?! HUH? I looked at them shocked and explained how I had nurses roll me at the N&N.

“You’re with us now, you aren’t ill, and you aren’t as fragile as you seem to think, you’re injury has healed and it is perfectly safe to move!”

Although I felt slightly apprehensive having been treated as ‘special’ and yes ‘fragile’ on the N&N ward, I did as they said and gripping the side barriers of the bed rolled myself over so they could help remove my clothing. They helped me to get my pyjamas on, it was soooo nice not to be in a hospital gown anymore! They believed in wearing your own clothes here and NO nappy type pads in the bed either!

The nurses at N&N had been so careful when lifting my legs to change my socks almost using a ruler to check they didn’t lift them a millimetre too high, but here…. well you would have thought they were doing the flipping Can Can with my legs! I did have to yelp a little to let them know just how stiff and un-flexible my muscles had become. I had to trust they knew what they were doing and try to go with it!

After I had bloods taken (which took 4 attempts), and the consultant and various Drs had been to carry out some tests to check my level of injury by seeing what bodily parts I could move and where I could feel a pin prick from head to toe, I was allowed to be raised up in the bed. A nurse came and started measuring my legs and hips… I looked confused.

“It’s for your wheelchair” she said.  My face must have been a picture….

I had told Martin categorically that I would not be needing a wheelchair!  I had made up my mind I was going to be a walker and would NOT need a wheelchair under any circumstances. I was horrified that a leaflet I had been given at the N&N on spinal injuries only had pictures of people sitting in wheelchairs, and NO-ONE walking or standing, seemed like ‘walker’ discrimination to me! I knew that some SCI patients could walk and I was going to be one of them!  I naively saw it as some kin of failure if I were to be in a wheelchair. How did I honestly think I would get from A to B?  Was I going to fly or be carried? How would I get to Physio lessons, or even to the luxury of the toilet when that time came?  Being I had 7 weeks of extreme muscle wastage and needed to learn from scratch how to walk again there was no other way to have independence other than with a wheelchair.   It was wheeled into my room and left by the side of my bed the following morning and I gave it a look of disgust.

Oh how that would change… I would not only grow to love and embrace my wheelchair; I would defend it and everyone who uses one but also learn to manoeuvre it like Stirling Moss does a racing car. How wrongly people perceive wheelchair users! Yes, many are paralysed, perhaps severely disabled, but many can also take steps, or actually walk. I have since discovered that people talk more loudly to you when you are out shopping in a wheelchair, since they think you may be deaf too! They also talk more slowly and give sympathetic looks like my brain isn’t working either.. LOL.

My first morning and first experience of getting back to normality was when I was wheeled into a shower room on a kind of bed that converted into a shower bed! It was the first time in 7 weeks I had felt a shower on me and as the nurse let me hold it and shower all over my body (whilst lying down) the tears poured down my face.  It felt like a little piece of heaven. The warmth of the water flooding all over me was inexplicably comforting.  I apologised for crying, but she told me I wasn’t the first!  In fact, this wasn’t my first shed of tears that day, I had awoken to the sound of birds and the dawn chorus early that morning which had also stirred me to tears.  I can’t even say that I had ordinarily noticed the birdsong prior to my accident, but the beauty of hearing pure nature outside gave me a feeling of hope and feeling connected to life again.  The simple things you miss in hospital really do bring a new sense of awareness.

Feeling fully refreshed and clean, I was wheeled back to my room covered with towels, where the same male and female nurse from the previous day slid me back onto my bed and assisted me with getting dressed.  We chatted and I was intrigued by their accent. It was when I explained my intention to be out (discharged) by the end of September (today was the 6th September) that the conversation stopped and they looked across at each other with a knowing look …

‘What?’ I asked innocently…. aware that they knew something I didn’t,

“Well we can see you have good movement in your legs, and your outlook is probably very good, but you’re here for the long-haul hun, even as a ‘walker’ you will be here for at least 6-8 weeks. Count yourself lucky some are here up to a year!”

Well that burst my bubble!  I tried not to look like the spoilt brat who didn’t win the pass-the-parcel prize, but my lip went, and the tears poured down my face. As I gasped for breath, I admitted my own naivety in aiming too high this time in order to achieve the quickest outcome. They were both really re-assuring and whilst I was told I would definitely get the best result possible according to how much I participated and the effort I put in, even in the best-case scenario I was looking at 6-8 weeks. This hurt so much as my goal meant everything to me.

I immediately phoned Martin and blubbed down the phone to him feeling like I’d been given a prison sentence. Cross at my own naivety of thinking I would get home by the end of September.

Whilst I was aware that I had been over optimistic and had no idea what was to come, a little stubborn part of me decided I was still going to secretly aim for the end of September and try to prove everybody wrong!  Aim for the Moon ……