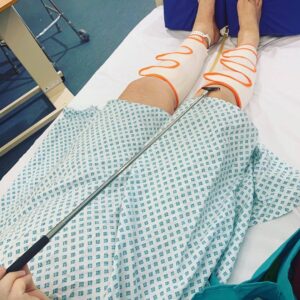 People who know me including my wonderful social media followers, will say (I hope) that I am a very upbeat person, sharing positivity, goals and dreams and that generally I am an optimistic and happy person who embraces life to the full.  I’ve always shared so much positivity and my personal achievements on Fb and its very rare for me to post low moments or dwell on anything negative.  What’s the point? Who wants to read about me feeling sorry for myself?  I believe if we share negativity we will attract more of the same. Social media isn’t the place to whinge…. Close friends and husbands are the ones for this in my opinion!

However, the reality of some of my hospital experience is quite shocking and was not shared amongst friends or social media because nothing prepared me for it and it seemed inappropriate or just too shocking for me to share. I will, however, be writing in a little more detail in the forthcoming blogs, to support anyone who has been, may ever be, or has ever known anyone to go through a hospital experience or injury similar to mine.  Ignore the next two blogs if you wish to bypass this!

The early weeks after the operation are a bit of a blur and yes, the mind has the innate ability to blank out memory of pain.. a bit like childbirth!  I do, however, remember on one occasion yelling at the nurses to let me phone Martin at midnight and was crying (or maybe screaming) down the phone to him to get over and be with me saying it was worse than childbirth, put me out of my misery and how could he let me be going through it alone? I was given a large dose of Morphine and probably something else too and the next thing it was the morning.  Poor Martin probably had no sleep!   Apparently, I was pretty horrible to him on his early visits to see me, which upsets me because obviously, he has been the most amazing support and pillar of strength to me throughout this journey.  As well as trying to run our new Café in the height of summer, manage our home, dogs, and my daughter, he was also having to spend an hour travelling to the hospital;with a further hour trying to park, all to visit me.

I was on complete flat bed rest for the first 3 weeks, which entailed quite a few difficulties… least of all being spoon fed or drinking from a straw.  I found it quite claustrophobic with the sides of a hospital bed up and only seeing the ceiling.  Martin came up trumps and found an ingenious bag from amazon which I would recommend to anyone in this situation as it fixes to the side of the bed (I did end up with green dyed arms by lying against it), but it soon became my comfort blanket with all my valuable items in it such as mobile phone, back scratcher, tissues, glasses etc.

Some weird and wonderful gifts started arriving from friends and supporters in the early weeks too, like playdoh (for hand dexterity despite my hands having full function) and the most bizarre glasses enabling me to spy (not so subtly) on other patients on the ward!

Cards started arriving by the dozen and the support I started to receive on social media spurred me on with my recovery.

I also had an array of different visitors ranging from those who just wanted to turn up to find out ‘the gossip’ and what on earth had caused this to happen to me? to those who just sat and stared down at me from my bedside barely saying a word but kind of watching me sympathetically like I was a corpse in a chapel of rest. Then there were those who kindly took care of my needs, like shaving my legs (you know who you are!) and giving me hugs and words of encouragement!  One thing’s for sure, in the middle of a heatwave on a hospital ward with no air conditioning, you DON’T want chocolate being brought to you!

FacebookTweetPinLinkedIn
Posted in Hospital 2019 and tagged hospital, recovery, sci, spinalinjury
← Life Will Never Be The Same…Are you bored? →