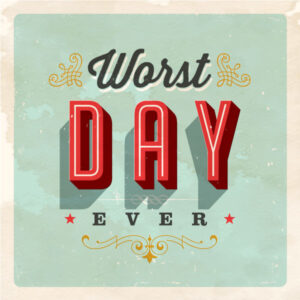 Now let’s get to the shittiest and lowest experience of all and then we can hopefully move on to some more light-hearted and positive moments of my journey in subsequent blogs.  I believe it was mid-August and around Cromer Carnival day which was also when my hubby was at his busiest in our café.

The morning started off well with me doing my exercises at 6am before the morning shift change of nurses.  This prompted a 6.30 am successful bowel movement by myself (hooray I really was becoming positive I was going to regain my bowels and not have a colostomy bag) but it was also a relief because it would mean I wouldn’t need bowel care today.  Smug victory for me! I rang the infamous buzzer for a nurse and after 20 minutes she finally came to say they were doing a ‘handover’ and I would have to wait.

I started ringing again at 7.20 and an agency nurse came. When I explained I was waiting to be cleaned she looked at me and said she had a whole ward patients who had ‘more important’ needs which had to be tended to.  “Oh, so I have to sit in my own poo then?” I asked quite innocently.  ‘Oh!’ She replied, the penny dropped!  She had thought I wanted a bed bath.  She went off to find some other nurses to help with rolling me … and never came back.  Another hour later I ring again and a male nurse pops his head round my curtain and I’m nearly in tears saying “I’ve been waiting 2 hours to be cleaned’ …… He interrupts me saying “we are just in the middle of doing red trays… you will have to wait”.  Red trays are for meals handed out to patients who need assistance.  I am a red tray being I am not yet sitting up more than 10 -20 degrees.  I’m now feeling really upset and say to him “well don’t bring me my red tray, I don’t want to sit up and eat my breakfast in my own shit”.   Emphasis on the last word here, just in case he also may have translated ‘being cleaned’ as getting my face washed!  He shook his head at me, with full understanding and left me lying there.

When someone called through my closed curtain and asked me what I wanted for breakfast I was now crying and replied saying that until I was changed I didn’t want anything. Still nothing.  Now Martin had told me many a time to stand up for myself and complain but you feel very vulnerable and lose any sense of control when stuck horizontal in a hospital bed, I didn’t want to make a fuss because I felt the nurse would maybe then not be nice to me or not tend to my needs as well such as getting my pain relief.

I pressed my buzzer and when the agency nurse came I ‘firmly’ asked to see the ward sister….half an hour later when she arrived I burst into tears and explained I’d been waiting 3 hours to be cleaned up.  She couldn’t apologise enough, got me 4 nurses to roll and clean me up immediately and went off to find me something to eat to replace my missed breakfast.

I felt pretty miserable now trying to face the day, and was also on catheter training which involves reaching down and flicking a little valve open and shut on the tube which lets your pee out.  The purpose being it trains your bladder to get stronger.  My valve release didn’t seem to fit properly and later that day as I reached down to release it …it came apart (again) and all the stored urine flowed out into my bed onto all the sheets, just as a friend arrived to hug me.  (She knows who she is!!)  I burst into tears and told her to stand back as I was lying in my own piss and needed to have my bed changed …she offered to leave but I insisted she stayed and I rang my bell again.

So just when you think you’ve had as much shit and piss as you can bear for one day, the very worse happened.  I was lying listening to some music later that afternoon when the urge for a poo came over me and I called to the agency nurse to come and pull my curtain around me. My neighbouring patient complained about having my curtain pulled on her side as it made her too hot and just a few minutes later the same nurse started to yank my curtains open saying ‘ I need to see you at all times’.   I was horrified… “what? Even mid bowel movement?” I pleaded with her.  “Yes” she snapped and there I was open to the entire ward feeling like I was centre stage with my knickers round my ankles! To be fair the ward patients weren’t paying me any attention but that’s not how I felt at the time.  I pulled my sheet up over my head and cried.  The indignity was too humiliating and poor Martin had a very distressed message from me.  He was outraged and phoned in to complain and on speaking to the ward sister, demanded to know why patients who use a commode or bed pan had the privilege of a curtain being drawn around them whilst I didn’t.

I was so distressed this day that I asked for a tranquiliser, I felt degraded, vulnerable, abused, invisible, like I just couldn’t face another day of this hell.  No amount of pain relief or ‘morphine’ numbed this psychological pain. Thankfully a really lovely ward sister came to see me after Martin’s complaint and could not apologise enough.  I was reassured the agency had been called and a formal complaint made and that her behaviour was bang out of order and my privacy should have been respected.  I would never have to be looked after by that particular agency nurse again.  I was also going to be moved to a new room to a bed by a window with a view which really cheered me up.  The sister sat holding my hand and made sure I was happy before she left.  Nurses like her I remember for all the right reasons!

My day ended with a message from my. wonderful hubby saying “stick with me kid, I’ve got your back!’ He was my voice, my advocate, my rock. xx

Posted in Recovery, Road to Recovery
← The MinionsSometimes The Worst Place To Be Is Inside Your Own Head… →

View all posts by NikkiRodwell →

This website uses cookies to improve your experience while you navigate through the website. Out of these, the cookies that are categorized as necessary are stored on your browser as they are essential for the working of basic functionalities of the website. We also use third-party cookies that help us analyze and understand how you use this website. These cookies will be stored in your browser only with your consent. You also have the option to opt-out of these cookies. But opting out of some of these cookies may affect your browsing experience.
Necessary Always Enabled

Any cookies that may not be particularly necessary for the website to function and is used specifically to collect user personal data via analytics, ads, other embedded contents are termed as non-necessary cookies. It is mandatory to procure user consent prior to running these cookies on your website.