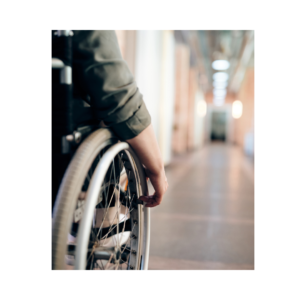 My wheelchair adventures didn’t get off to a great start when I was winched via a hoist into my new wheelchair. I must have looked like a crushed bug dangling there, but Martin found it very amusing and I growled angrily when he asked if he could video the occasion! No, I definitely did NOT want this most undignified moment recorded for Facebook! Safely planted in the wheelchair, it hurt much more than I could have possibly imagined. I had not realised just how much my muscles needed to rebuild and strengthen. I could barely lean or move in any direction and trying to wheel the damn thing was not only complicated (I couldn’t work out which wheel to pull or push to turn it), but it hurt everything everywhere.

Within half an hour I was whinging to be put back into the safety zone of my bed,  but I soon learnt that if I was hoisted back into bed I would have to remain there until the following day. Progress would not happen that way!

It was a bit of a culture shock after the N&N: the nurses literally dumped me into the wheelchair and I was left to get on with it! No softly softly approach; if I wanted something, I had to wheel over and get it, no matter how much it hurt. I soon learnt that I was expected to build up to 4 hours a day in the chair before I would be considered for the next stage of my journey – ‘Osborne 3,’ the pre-discharge ward.

I felt massive anxiety worrying that it would always feel so ‘alien’ being sat in the wheelchair, and the realisation hit me of just how long the journey ahead was. It was one hell of an endurance test trying to remain in the wheelchair just for one hour on my first day, and it didn’t help that I was scared to move since my flipping catheter felt ultra-sensitive and kept triggering bladder spasms which were more than horrendous! My headphones and music became an integral part of helping me through these moments, as did my ‘calm’ app. I learnt to breathe through the discomfort and the panic with time, but poor Martin had a very snappy and difficult wife to deal with at first.

I forced a smile for the camera … but believe me it was fake! The relief I felt when I got back into bed was blissful.

On Martin’s second day of visiting me, I was introduced to my physio team and shown how to use a ‘slide board’ which is like a large wooden skateboard (without wheels) and is used to transfer from bed to wheelchair and later on from wheelchair to toilet, car seat etc.  I successfully managed to do this whilst being supervised. When I was transferred back into bed a couple of hours and a lot of whinging later, the slide board was returned to the physio department. Then came a moment I’ll never forget and Martin still laughs at…I asked the nurse where I was to get my slideboard from the following day.

‘Oh, you will make your own slideboard in woodwork’ she replied. My jaw hit the floor in disbelief and I responded

Martin was sniggering and when she assured me that this was not a joke, and yes everyone gets to make their own slide board in ‘woodwork class’ Martin couldn’t withhold his uncontrollable fit of the giggles … he knew what a useless muppet I am when it comes to household ‘handyman’ type jobs.  The vision of me in a woodwork class was too much for him to bear!

It was a Sunday and Martin was heading back to Norfolk. My goals were written down that same evening; to be signed off for bed to wheelchair transfers by the time he came back in 4 days time on Thursday, which would mean they would allow me to do a transfer to the toilet! YAY!  I could see the freedom of being able to get myself out of bed and into the wheelchair would give me.  My goal was smashed the very next day and physio signed me off to do transfers on my own!  In fact, not wanting to blow my own trumpet, but only one day later I was signed off to do ‘lift and shift’ transfers completely bypassing the use of the slide board meaning I never actually had to go to woodwork to make my own.  Obviously, something I relished in telling Martin ! A lift and shift involved angling the wheelchair next to the bed, lowering the bed to the correct height and then shifting myself across into the seat of my wheelchair using my arms to bridge the gap instead of the board.

I loved my first physio class and told my personal therapist that my goal was to be walking when I left the hospital and that I respond well to goals.  After assessing me, she set me the goal of using a Zimmer frame to stand and turn in 10 day’s time.  It may come as no surprise to you that I smashed this goal in just 5 days, and her face when she watched me walk around the gym using the frame made me feel proud as punch!

By far my worse memory of being in Sheffield was the bladder spasms. The sphincter muscle would clamp into a painful spasm for about 30 seconds with me breathing through it like a labour contraction! I pleaded with the staff after a week of this, and they put me on antibiotics in case it was a bladder infection. I was so relieved one day when a lovely nurse decided that my catheter just ‘had to come out’ …. she believed my body was rejecting it and was trying to do the job itself. So Cathy (nickname for the catheter) was finally removed and my fanjita was having a partaaaay! It was free… I could move without getting spasms and best of all, I COULD PEE!! Whilst I narrowly missed getting onto the toilet the first time due to my dodgy wheelchair skills, I can safely say I had no further accidents and the relief of having my bladder AND my bowel back under my own control was like the best thing I could have wished for! My minions had worked! It is something that I am so grateful for to this day, and it is very rare for a SCI (spinal cord injury) patient to regain these functions, even if they are able to walk.

I had a beaming smile on my face at my next appointment with the consultants and doctors as I tentatively walked into the room with a Zimmer frame! My physio was there to ensure my safety and to report on my speedy progress. I was bombarded with questions … including personal questions about my bowels and passing wind; ‘are you able to hold a fart in Nikki?’ my consultant asked, I looked perplexed and answered ‘why would I want to do that?’ an answer I can now see is very amusing!

The moment finally came and the Drs told me they had decided on a discharge date and that so long as I continued with my current pace of recovery I would leave on 4th October! OMG! I was elated. I had blown the theory that despite being a walker I would be in here for months and my original goal of wanting to be out by the end of September was missed by a mere 4 days. As my title to my blog says…. ‘Reach for the moon, if you miss, you still land in the stars’ I was going home!

FacebookTweetPinLinkedIn
Posted in Hospital 2019 and tagged hospital, physio, recovery, spinal cord, wheelchair
← Eh up! We’re off to Sheffield!All or Nothing! →