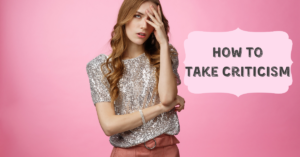 I feel I have a good grasp on what can be considered ‘constructive feedback’ having recently studied the role of Evaluator with my Toastmaster’s group.  I gave my first evaluation last week for someone’s ‘icebreaker’ speech and was careful to abide by the sandwich technique, giving lots of praise, followed by a few constructive comments on how to improve, ending by summing up with more praise. By contrast, I also have experience of negative/destructive criticism which I would like to share with you in this post.

None of us like to receive criticism, and to some of us more sensitive souls, even constructive feedback can be taken negatively and misconstrued as criticism. I know I felt somewhat criticised when my manuscript came back from the editor last week with loads of advice on what needs to be done to improve my novel. But we can learn to reframe how we hear feedback differently.

The expression of disapproval of someone or something on the basis of perceived faults or mistakes.

Sadly, there are people who criticise in an unfair and unjust way. They offer unwanted opinions, or snide underhanded remarks when they aren’t asked for. This is not constructive! Nine times out of ten it is probably because the person is insecure, sees the glass half empty, or feels compelled to put others down to raise themselves up. (Sad!)

I was often criticised and put down as a child and have one particular memory imprinted in my mind: when I bought my first pair of tartan trousers (aged fourteen), and thought I looked the bees knees!  It was the first time I had saved up enough pocket money to do this.

Imagine how I felt, when I was immediately put down with the comment “what will people think?” Something I often heard during my childhood, but it particularly hurt on this occasion. I was reprimanded for squandering my pocket money on something so ridiculous. It would have been far kinder to have just said “they are not my cup of tea, but I know they’re all the fashion.”  Being direct does not have to involve negative criticism.

It took decades to lose this critical voice in my head, in fact I didn’t change the record until I was well into my forties.

I came to realise that I wasn’t being judged by ‘the other people’ that I so often feared, but rather by my mother who was the one telling me this.  None of us are perfect as mothers though, and, in fact, we quite often repeat the same behaviour that we received. But I believe it is always best to strive for balance; give some praise and positivity, and bear in mind the ‘sandwich’ technique.

Wikipedia’s definition of ‘criticism is:

It is the construction of a judgement about the positive and negative qualities of someone or something. Criticism can range from impromptu comments to a written detailed response.

I think the key word here is judgement; if someone comments on personal things about our character/appearance, or judges our actions, this is negative (destructive) criticism.

She’s the type of person who never cleans her cupboards

You’ve never been very good at …

She’s great with the children, but hopeless at keeping the house tidy

Why do you always …

The list is endless, but it’s often easy to detect the criticism by the tone of the person’s voice.

Think Before You React

When you receive unwanted criticism, my advice would be to give no reaction. Ask yourself whether it really was an insult, a thoughtless comment, or (hopefully), meant as constructive feedback.

It’s easier said than done to not react, especially if it feels like a slur on your character but be the stronger person and choose your reaction well. You can always avoid being around negative people like this; choose to be around people that lift you up, not drag you down. We are not forced to stay around people that give negative criticism or unwanted advice.

When I received my manuscript back from my editor last week, it felt like someone had scribbled all over it with red marker pen. (Obviously not, since it was sent electronically – but you get what I mean). It was like receiving a terrible school report and it triggered my ‘imposter syndrome’ something chronic.

I initially thought, blow this! I’m obviously not meant to be an author and was going to bin the whole thing.  But then a few hours later, I re-read the report and made myself absorb the positive comments (albeit they were few).

I stopped seeing the comments as a criticism and started to see them as a challenge on how to improve my writing. I’m not a person who gives up easily!

With the third read, I came to the realisation that the suggested improvements were about the book, and not about me as a person (or even a writer), so I pulled up my big girl pants and got on with things. The whole purpose of an editor is to get your book to its best after all, and you need only take on board the changes you agree with. Editors are there to be helpful.

Yes, it was difficult to read that my characters need more development, that there’s a whole host of grammatical errors, and, worst of all, flaws in the storyline.  But, how can I get better and create my best work without these corrections? I’m seeing it as a school report, and thankfully, nowhere did she write

“Nicola persistently talks in class and seems to struggle with her work. D Minus!”

Not only is negative criticism unhelpful, but it hurts. It doesn’t work either!  There really is something to be said for ‘ignore the negative behaviour and reward the good’.

People tend to criticise when they themselves are unhappy, or have high expectations of others. It becomes all too easy to give unsolicited advice, or speak their negative thoughts out loud.

Something we could all learn in life is: if you haven’t got anything nice to say, don’t say anything at all !

Remember It’s Not About You

If you are given feedback at work, or other areas or your life, and you feel that you are being criticised… try not to take it too personally. Ask yourself why the person is suggesting the feedback; is it to improve your role, or you as a person? It should be about the role or job, with specific, actionable observations and facts. Constructive criticism benefits both the person receiving it and the organisation.

Listen out for ‘I feel’ phrases. “I feel you struggle with deadlines,” or “I feel your skills would be better placed..” This is the correct way to give feedback. This is far better than “you don’t have skills that work,” or “you aren’t very good with deadlines.”

Feedback should be objective, not subjective, and always followed up with some positives and praise.

Make sure that you are given opportunity to respond – although my suggestion would be to take some time to reflect on points that are raised first. My husband and I often go away feeling a little hurt, but then after thinking on things agree that the other person had some valid points.

If you can understand and see the difference between constructive feedback and negative criticism, you will find it much easier to navigate what is helpful in your life, and what is not. Be aware of your own sensitivity and any programmed responses from your past. If you lack confidence, or have been overly criticised in the past, you are likely to be more sensitive to criticism.

When receiving any form of criticism, be it negative or positive, always take a deep breath before you respond and ask yourself:

“what can I learn from this?”