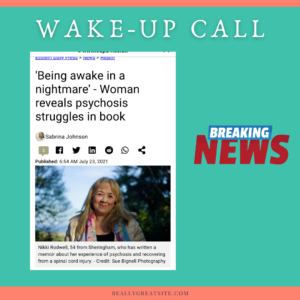 So, it’s Monday. The day for Monday blogs and I realise that I am seriously neglecting this area of my life now.  With so much to learn about publishing and promoting my book I just haven’t made the time.  But enough of excuses, it’s just not good enough!  I love writing and I need to keep doing it.

Catch me if I fall – How mental health broke my back but didn’t break me.

For those who may not realise (and I’m sure that’s not many of you if you happen to be on my social media at present), I have just released my book. It was scary and of course I felt a little vulnerable. Seeing a newspaper article with the title ‘’Being awake in a nightmare – Woman reveals psychosis struggles in book” was a bit of a wake-up call.

So, what better time to talk about stigma than now; how it’s truly made me feel releasing the book this week.

Firstly… we tend to ‘categorise’ people in life, and when this is installed in our minds, we then form our own personal story about them which is often ‘not true’.  I wasn’t enamoured when I realised that most of Norfolk would now probably see me as ‘the woman with psychosis’, magnified by the fact that my face is obviously across the front cover of my memoir for everyone to now recognise me by!  I did contemplate jumping on a plane and leaving the country. 😅 But then I thought, ‘Nikki, it’s what your book is about… it’s how you are hoping to make a difference’.

What matters is what I think of me, and the friends and people who know me for who I am today. They know I am not in a psychosis day-to-day or week-to-week.  In fact, I have not had any signs or symptoms of psychosis since that fateful time in 2019. So why would I put myself on the line like this?  Why introduce myself to the general public in an open and vulnerable book that depicts what my 2-week psychotic episode was like so that they see me as ‘the psychosis woman?’  Well – it’s simple… to break down ‘stigma’; because I’m not crazy. No, I’m not even a little mad but merely had an illness for 2 weeks just like you or someone you know had chicken pox, shingles, or a bout of flu last week.  Would you label them ‘sickly’ or ‘shingly’ after having an illness? In the same way I should not be labelled ‘crazy’, but I know I will be by some.

Don’t put it all in one box

It’s easy to put mental health illnesses and disorders into one box, especially if we haven’t experienced them ourselves. But it’s also easy to put ‘psychosis’ in one box too.  ‘All psychotic people hear voices and have hallucinations. They are violent, aggressive or do crazy things.’ This is not true. Nor is the fact that they are always psychotic.  People with schizophrenia (did you know it was national schizophrenia day yesterday?) are not always amid a psychosis, albeit I believe they experience it quite often. Our disorders and experiences of psychosis are all unique and can vary a great deal. My story is only one of many and I have already heard that it has helped people in the mental health profession to have greater understanding.

I caught up with a fantastic series at the weekend called ‘Too Close’ with Emily Watson. Did you see it? I feel this was so well directed and acted. You started off with one opinion about the leading lady, and as her story unfolded you felt very differently about her.  A great example of not judging a book by its cover.  You can find it on ITV Hub.

We all need to not be so quick to judge people for many reasons. To try looking at what is underneath people’s words, actions, behaviours etc. We need to see the person first and foremost and make the effort to learn and understand about their mental health illness if necessary.

It is my intention that by speaking out about the brief, but somewhat ‘crazy’ episode in my life and how facing up to it was incredibly difficult for me, it may help others either with psychosis. Perhaps help those with other mental health conditions (chronic or acute), to be brave and know they can speak out about theirs too. I believe this is the path to freedom and steering us towards healing. Stigma is slow to be removed, so I believe it is important to learn to be brave and stand up to it where possible.

Men in particular, struggle to talk about mental health problems, believing themselves to be ‘weak’ in some way. They often find it difficult to open up and expose their true feelings, which sadly shows in the higher rate of success they have with suicide. This needs to change.

I don’t understand the mind of someone with mental health disorders that I have no experience of, and I certainly don’t expect them to understand mine. But I keep open minded and learn where I can. Likewise, I don’t expect someone with depression or an eating disorder to understand what a psychotic episode is like. Like I said earlier, you can’t put it all in the same box.  I do know, however, that very often, poor mental health will involve a great deal of suffering.

I can also say with some conviction that I don’t understand the minds of very many people who don’t have mental health conditions. But that’s okay too, because it doesn’t matter, it’s the person underneath that counts!

So, for people who have no experience of poor mental health, please take the time with me to be tolerant, patient and loving of those mental health conditions that you and I know nothing about because as with all suffering we want it to stop. Always make the time to stop and listen to peoples worries or difficulties without judgement, because often that can make so much difference. We all like to be ‘heard’ at times.

The only way each of us can learn is when others share with us; this is my intention with my book, albeit in a frank and honest way.  It is important to read and learn on many issues, not just mental health, so that we can always be kind and have compassion for our fellow human beings. This is the only way for stigma to be reduced and gives mental health sufferers hope.

When I become a speaker, I hope to demonstrate that ‘perfectly’ well and ‘normal’ (whatever that is) people can go so horribly wrong when something affects their mental health. My episodes of psychosis are unique and triggered by extreme stress, from which (thankfully) I fully recover. Despite stress that has happened since my episode in 2019, I have not suffered another episode.  I pray that perhaps I have increased resilience and it won’t happen again; that something has changed with my brain maybe?

In the meanwhile, all my friends and family get quite jittery when I say I am suffering from ‘stress’.  Understandably so.

I thank those of you who have taken the time to read my book, whether to connect on some level with me, or to learn a little about my experience of psychosis.

I would like to add as a final note, that the book is also to bring awareness to spinal cord injury, which seems to get shadowed by the mental health a little! 5% of all proceeds are going to Back Up Trust, a charity that does great work for those with spinal cord injuries and their families.  I will be setting up a donation page on my website in coming weeks too, because I feel truly blessed to be walking again and I’m humbled by the strength of others not as fortunate as myself.