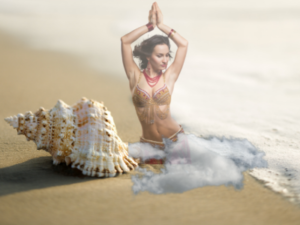 “I’m going to see the sea before you,” boasted Alison as she clambered over her brother.
“Yer, well, you’re such a girl, I bet you won’t go in above your knees,’ taunted Edward, trying to block her path.

“Sshhhh..”  Their mother Jayne was frazzled after the journey and ushered them to calm down. “Honestly you two, I wish you would get on together; you do my head in!” She said. “The world would be a more peaceful place for all of us!”

Jayne grabbed the bulging cool bag and towels from the car boot, and passed the lead to Alison along with their faithful spaniel ‘Cookie’.

“Awe but Mum, I want to beat Edward to reach the sea,” she protested.

“I can’t manage to carry all of this down the slope by myself. ” Jayne replied sternly, also passing the cool bag to Edward to even things out.  Why was everything a competition between the two of them?

Scuffing their feet in protest and glaring at each other, the children worked their way down the slope to the waiting seaside playground.  It was the end of the season, and thankfully the beach only had a handful of visitors which left them a huge expanse to choose where to pitch their spot.

It was a cloudy day. The salty air clement, with a gentle breeze blowing Jayne’s loose curls across her face.  She swept them aside as she sighed and took in the view; it was something she never tired of no matter how often they visited. She thought of it like a living canvas: the sea changing colour like a chameleon to match the skies, with either a gentle swell or dancing waves. Then the shoreline alternating from an untidy washed up mound of crabs and cuttlefish to a clean sheet of fresh dewy sand, perhaps revealing chalk beds as the water retreats to the ocean.

Today the sea was calm, gently lapping in to reach the shelf of pebbles, with its foam seeping into the nooks and crevices before dissolving away.  Jayne plonked their belongings down on a strip of sand close to the shoreline as the children ripped their clothes from their youthful bodies and scrambled towards the water. The inevitable tears followed:  Edward dived in first, but his smugness was soon followed with angry shouts as Alison splashed salt water in his eyes.

Jayne sighed and decided to leave them to it. She picked up the tennis ball from her bag and strolled along the shoreline with Cookie at her heels. Her toes sank in the water leaving faint footprints to be washed away with the incoming waves.

Jayne threw the ball a short distance into the sea, and Cookie dived in to swim out and retrieve it. It was at this moment, that Jayne caught a glimpse of a faint rainbow aura glinting from the sand. There was no sun to reflect such a phenomenon from the water, so she crouched over to investigate just as the next wave washed away. The only thing she could see was a perfectly coiled shell embedded in the sand. She picked it up, but there was no rainbow hue, she must have imagined it. It was just an ordinary shell with a cream-coloured exterior speckled with a swirl of brown markings.

Jayne wiped the sand away with her t shirt. It was a good size, and would look pretty on the bathroom shelf at home, she thought. As she rubbed the last remnants of sand away, something rather mysterious happened. The colour of the shell started to radiate the colours of the rainbow.  First there were shades of pink, then blue and green hues glowing from the hard outer case.

Jo looked back to check on the children; they were busy making sandcastles. Her attention was quickly drawn back to the shell as it started to vibrate gently in her hand with a  milky white smoke seeping out from its canal.

She dropped it in horror, just as a loud caw rang out from a seagull overhead, and then whoosh! The smoke erupted from the shell, rising curled wisps that snaked before her very eyes. Out of the smoke, the figure of an Indian woman was slowly revealed, dressed in beaded harem pants and draped in chiffon with gold coins belted around her waist.

“I am at your service your highness. I am the genie of the ocean and you have set me free to swim among the sea bed to the land of Mer-ma-tasia; the sea world where we genies live in perfect harmony with the mermaids and mystical sea creatures.  But FIRST … your wish.”

Jaynes’s mouth agape, she glanced around to see if anyone else was witnessing this, but people on the beach seemed oblivious to the giant ball of genie smoke, even her children.

“Your last wish,” the genie continued… ‘Your last wish spoken, will come true since the heart never lies and knows its hidden desire.  Whether uttered in years gone by or whispered in a dream, the wish will be granted before the night descends.“

Before Jayne could respond, the genie evaporated into another swirl of smoke which rose high into the air before diving into the ocean and vanished. Just like that! No trace of smoke, no shimmering rainbows, not even a ripple in the water.

Jayne rushed back to the children.

“Edward, Alison… tell me you saw that?” She said, gasping for breath.

“Saw what?” They said in unison, busy digging the sand with their hands to make a moat for their freshly made castle.

Jayne was dazed. It seemed nobody had seen anything. Had she imagined it?

She sat down on the towel, grabbing herself a drink of water.  She looked out to sea, going over in her mind what had just happened; perhaps she had hallucinated, had some sort of momentary lapse of sanity. She looked at the shell which was still in her hand and rubbed it again. Nothing. It was just an ordinary cream and brown spiral-shaped empty shell.

She tucked it in her pocket as she pondered over the genie’s words. How would a wish be made to come true if she hadn’t wished for anything? There was nothing in her life that she had wished for; none that she could remember anyway.

Oh, how she regretted not aimlessly wishing to win the lottery last night or to be the lucky winner of a free holiday to the Maldives. As she conjured up images of all she would wish for given the opportunity again, she drifted off to sleep with the gentle sound of the lapping waves and her children laughing.

It was time to go. There was a chill in the air and the tide was on the turn.  Edward and Alison helped to pack things up.

“Do you want to carry the bag or shall I?” Edward asked Alison politely.

“You take the bag and I’ll carry the towel.” She replied.

They trotted off together arm in arm laughing and chatting as Jayne trailed behind with Cookie.  There were no challenges from either of them to reach the car first, no boasting over who had built the best sandcastle or found the smoothest pebble. No, Jayne had never seen them getting on so well, not even for five minutes.  It was a sight to behold.

She pulled the shell from her pocket, looked at it and smiled.

Perhaps she hadn’t imagined it after all?

FacebookTweetPinLinkedIn
Posted in General, Writing and tagged beach, genie, shell, short story, writing
← Are you stuck?Beam Me Up Scotty! →