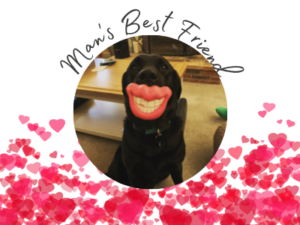 I was out for a winterly stroll in Sheringham park with my two fur-babies this morning. The sun was shining, the golden leaves carpeting the ground and it was simply glorious. This type of day always gets my creative juices flowing, and I decided I would write a blog when I got home.

So here I am, to talk to you about my beloved dogs – in particular, Mabel. Both dogs were my motivation to push for maximum recovery with my spinal cord injury; to get to a stage where I could walk them again. This has more or less happened, although I still struggle to hold them both on leads. It is made especially difficult because I use walking poles or my walking stick, so I tend to go to wooded areas where it is safe to let them off lead. Well, as safe as it can be with a dog like Mabel!

Her nickname is Jumanji.  She bombs through the woods, off-piste, clambering through the undergrowth and exploring her playground like an over zealous toddler. I probably let her wander too far, but she always returns when I blow the whistle. You know she is coming when you see the bracken trembling in the distance, the movement creeping forwards like a wooded Mexican wave as she approaches. Then she shoots out of the bushes like a cannon ball, covered in snot and saliva, with her tongue hanging down to the ground. 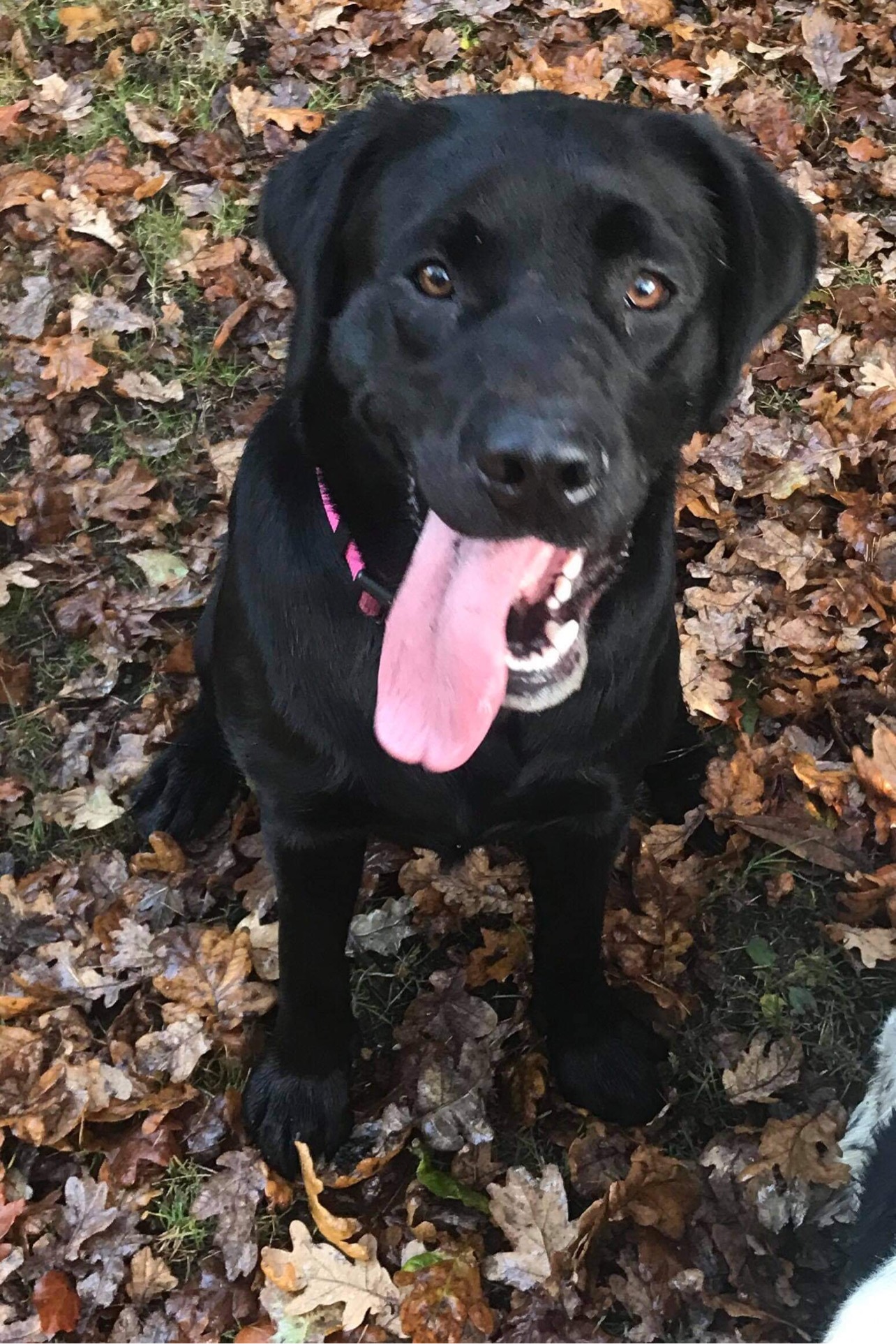 She’s no lady. Rather, a boisterous, clumsy, stubborn, but oh-so-loveable black Labrador.

Now, it never ceases to amaze me how varied people’s responses are to dogs. Some dog lovers are so protective, they scowl when my dogs go up to partake in a little social bum sniffing. Others, want to stop, stroke, give treats and are very forgiving of Mabel when she forgets her manners, or when Chester decides to check out their pockets for more treats.

But non dog owners? They haven’t a clue, and despite the fact I use walking poles or a stick – which I think signifies I have a mobility issue – they can be very harsh and unforgiving.

Mabel is trained to recall with the whistle, which thankfully works around 98% of the time. If she looks as though she is going to greet somebody she shouldn’t, I can blow the whistle and she turns on her heel to return to me. If I misjudge the timing, or someone stupidly decides to encourage her, she sometimes jumps up to try and lick their face.  It’s just a dog’s way of trying to be a little more human-like, isn’t it?! Other dog-owners are usually spared from having their faces licked, as she is more interested in their dogs than them. 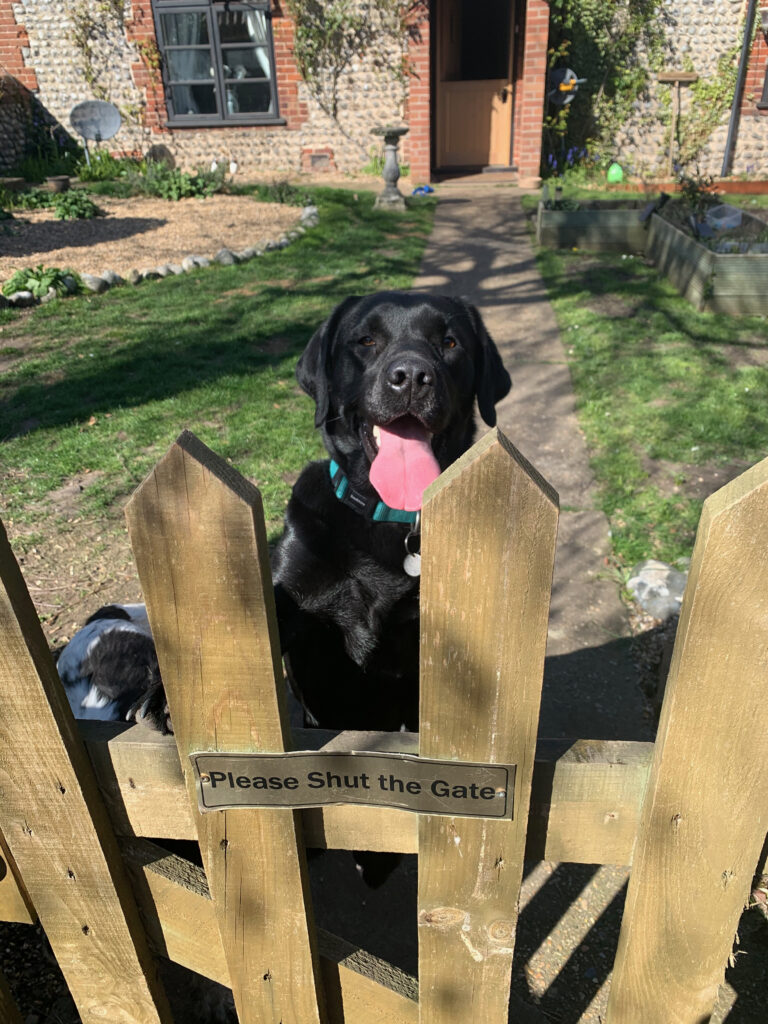 In the main, me ‘n’ my dogs have the woods to ourselves, and I don’t need to feel anxious about any over-exuberant encounters. However, I am mortified on the few occasions when it has happened, and hobble as quickly as I can to retrieve Mabel. I appreciate it makes people angry, and I also appreciate they feel I should have better control over my labrador, BUT, I cannot walk her on the lead with my spinal cord injury.

You can count on ONE hand how many times she has disgraced herself by jumping at someone this year, so it could be worse… it could be two hands! But what would you do?  Stop taking her out? Get rid of her? Give her away to another owner?

I can’t… because I love her.

So, for the few non dog-friendly people who get bowled over by Mabel’s exuberant greetings, I’m SORRY!  Go read my memoir and perhaps you will see what a miracle it is that I’m out walking my dogs, and find a little more understanding.

I’ve tried dog training, and even the trainer soon became exasperated with her. It took over 45 minutes for her to get through the front door without Mabel getting over excited – a real battle of wills! The only thing that gains any control, is the whistle – and believe me, I’ve worked hard with that.  But, as with most things, it doesn’t have a 100% success rate.

I’m told she should eventually calm down, that they lose their ‘puppiness’ when they get to three years old. Mabel is now coming up to four!

So, back to this morning’s walk. A couple were approaching me as I returned in the direction of the car park. They thought I was a single dog owner as Chester was walking beside me and Mabel was off chasing squirrels in the woods. I blew my whistle three times, and Jumanji thundered out of the bushes.  She obediently skidded to a halt in front of me. I gave her a treat, and then – because the couple stopped to chat – I put her on the lead.

His wife (I have no way of knowing if they were married!) wanted to greet my dogs. Like me, she had walking poles (I’m not sure if these are used by people without a disability?) and Mabel proceeded to tug me, nearly pulling me over. She then jumped on the woman, who was making far too much fuss over Chester, making Mabel jealous.

I had made the mistake of not putting the halti on Mabel’s nose and her strength overpowered me. Whilst she didn’t knock the woman over (I would not be writing this article if she had!), the couple moved on, and I got both dogs secured with leads and under some sort of control. As they left I heard the man say:

“Of course, it’s never the dog’s fault, it’s the owners.”

I don’t know if he meant me to hear this, but had they not been so eager to talk to me and my dogs, then the whole thing could have been avoided!

I staggered the last 100m to the car with the dogs on leads, contemplating my dilemmas. Do I walk the dogs for long enough? Should I keep them on the lead when I go to the park, even though it would be extremely difficult and hurt my back?  Mum guilt has definitely turned into dog guilt these days.

I said hello to a lady in the car park who had a cute poo-cross something or other. I thought how much easier life would be if I had a smaller dog like hers, but then hindsight is a wonderful thing. When we got our springer and Labrador, I didn’t know that I would break my back in 2019;  that I would be the main dog walker in our home.

My dogs probably are too big for me to handle with my impaired mobility and balance, and yes, they can be a bit disobedient at times, but then they are like my daughters.  They have strong characters, can be a bit of a handful and have a mind of their own. Rather that, than be boring though, huh?