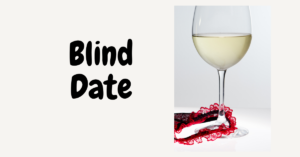 Marilyn had made more effort with her appearance than usual.  She would never leave the house without her warpaint applied each morning, carefully choosing the right outfit to impress the mothers at the school gate. But tonight, was a special occasion; it called for her blazing red lipstick, extra thick lashes, and stiletto heels.

First to arrive at the dinner party, Marilyn was seated at the dining table while the hosts tended to the meal in the kitchen. Her best friend Selina had insisted she come; confident that her husband’s new work colleague was a perfect match for her, and Selina knew her better than anybody else.

Divorced at forty-five and still single three years on, she was more than open to the idea of finding a new man to take care of her. But what if he wasn’t her type? Or worse still, what if she wasn’t his?

Selina’s husband ‘Eric’ waltzed into the room with a bottle of Chardonnay.

“So, his name is Caleb… you’ll like him.” He said, pouring her a large glass of wine and leaving the bottle on the table. “Help yourself to crisps, back in a tick”. He said and left the room.

Marilyn gulped down some wine before grabbing the compact mirror from her purse to check her appearance.  The tight black curls were still rigidly held in place, her wrinkles expertly masked by an extra inch of foundation. ‘What kind of a name is Caleb?’ She thought to herself. ‘He sounds like the boring religious type.’

As she finished applying a fresh coat of lipstick, the door opened, and a strange man wandered in. She snapped her compact shut as if she had been caught with her hand in the cookie jar.

“Good evening,” he said, his silvery tone melting Marilyn’s stony exterior instantly. She really should learn not to be so judgemental. Here, standing before her was a man of high status! So dapper in his tweed jacket and tailored shirt. Obviously, a man of wealth, but handsome too?  She admired his chiselled features, dark wavy hair with flecks of grey and his physique which oozed magnetic sex appeal. How wrong she had been!

“Hi, I’m Marilyn,” she said, as she shifted to one side in her seat and eased her elbow on the table to coyly balance her cheek against her hand. There was no middle ground with Marilyn – she was either passively shy or in your face like a brash salesperson.

The man filled the awkwardness with polite conversation while Marilyn guzzled her wine down and poured herself another glass. The evening wasn’t going to be so bad after all, she decided.

“Well, I have to say, you are not what I had expected,” she interrupted him, oblivious to anything he had said. “But I’m certainly not disappointed.” She gave him her best ‘come to bed eyes’, her smile revealing her newly whitened teeth.  The man looked confused.  He glanced at his watch just as the door burst open. An attractive blonde woman bounded in.

“I’m sorry I’m late darling,” she said, and pecked the man on the cheek before sitting down next to him.

“This is my wife, Sarah,” he said, looking relieved. “She had a meeting tonight, so has come straight from work.” Marilyn’s face reddened as the blood rose to her cheeks.

“Here we go,” said Selina, entering with a large platter of entrees.

“And look what the cat dragged in!” Eric said, sweeping in behind her, followed by a short bald man in scruffy corduroys, a sweat-stained polo shirt and a smile that revealed slightly crooked, nicotine-stained teeth.

“Caleb, meet Marilyn. Marilyn, meet Caleb,” he said.  “I see you have already met my brother Steven and his wife?” he added.

FacebookTweetPinLinkedIn
Posted in General, Writing and tagged fiction, shortstory, writing
← The Hardest Part of Writing my Memoir What is Happiness? →