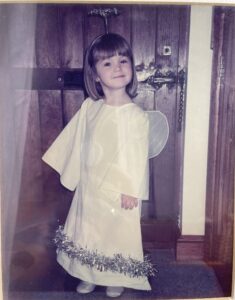 I was lying in my daughter Alex’s bed this morning, which is mostly redundant now she is living in Leeds where she  goes to uni. Let me just add here, that no, there is nothing wrong with my marriage. Quite the contrary. It is fundamental for our happy marriage that I escape my husband’s snoring some nights. I give dopey, sleepy and grumpy a run for their money if I have less than eight hours sleep!

I sat propped up drinking my morning cup of mint tea, thinking about life, as my two fur-babies ‘Mabel’ and ‘Chester’ munched on their Bonios.  I looked at the photo on the window sill (the main photo on this blog) which has remained somewhere on display in my house for over 20 years now.  A memory of a happy time came flooding back to me as clear as if it only happened yesterday. I smiled… realising I had my topic for this week’s blog.

So, I figured that if this ‘angel’ can etch a memory for me that can still make me smile two decades later, then perhaps sharing it with you may just bring a smile to your face too. I certainly hope so.

How I used to dread hearing what part my children were to play in the yearly nativity. Apart from plonking a tea towel on their head and tying it with string, I am more than useless when it comes to making costumes. Thankfully, my mother-in-law made this costume (if my memory serves me correctly).

Now, I may be biased, but with her cute little blonde bob and cheeky smile I think she is angel ‘perfection’. Well, maybe not in a celestial way, but I’d much rather an angel with ‘attitude’, wouldn’t you? I smile just at the photo, let alone the story that goes with it!

So, I can still picture the line of angels filing out onto the stage into a hall full of proud parents. Many of her classmates tiptoed in with their heads coyly hung, peering sideways to see if they could catch a glimpse of their mum or dad. Some needed a friendly nudge, others held hands with their friends for Dutch courage. They all resisted the urge to wave at their parents in the audience, as instructed by their form teacher.

And then there she was! Alex strutted in… head held high, beaming at me with pride, and, of course, sin of all sins, she waved straight at me!  With her friends all scowling at her for disobeying this most sacred rule, they all sat down and waited patiently until it was time for their big number.

The Angels song was obviously next up. This was signalled by Alex bouncing to her feet as if a rocket had been placed under her bum, before the first note had barely been cast out. She frantically beckoned to the rest of the class as if they were going to miss their moment.

Whilst I don’t remember the tune or the words, I do recall it was a modern and upbeat song with a repeating chorus. Alex radiated confidence as she jiggled about, over exaggerating every dance move and clearly relishing every moment. How she shone amongst that line of cute little angels!

I became aware that the audience were nudging each other saying ‘look at that one’, not because Alex was doing anything wrong, but because she was so incredibly funny with her enthusiasm and confidence. Then the best bit happened…

The chorus involved each of the angels opening their arms wide on the first beat, followed by other arm actions. As Alex flung her arms open, she was oblivious to the angels either side of her who were nearly knocked over as her arms blocked their faces out of view.  Whilst they looked a bit miffed, I should add they were not hurt in any way. The audience began to titter.

Each time the chorus came round, which was about four times in total, Alex flung her arms open wide at just the right height to whack her neighbours around the face. They didn’t seem to cotton on that it was coming, otherwise, they could have ducked! It was like a sketch from an Airplane movie (am I showing my age here?!).

So, without knowing it, my little angel stole the show and stole my heart! I have the whole thing on video somewhere, as I never went anywhere without my camcorder in those days!

I have always called Alex ‘my angel’.  She came out of my womb singing and dancing and had such a zest for life as a young child. I used to tell her she was an angel sent to me from the heavens above. She was a gift, as many of us believe our children are.

They say we only ‘borrow’ our children. This is because we should allow them to spread their wings and find their own independence once we have nurtured their growth and development. Alas! All too soon, it seems our job is done.  But the memories of fun childhood moments like my little ‘angel with attitude’, remain fondly in our hearts.

Do you have any funny memories of your children? Let me know in the comments.