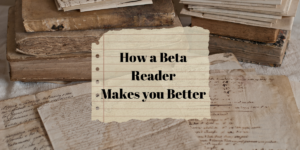 No, it is not a typo; I do mean BETA reader. This is the person who reads an author’s new book before it is sent off to the editor. I can hardly believe that I am at this point with my latest book, which is book one of a three-part series.

Purpose of a beta reader

The purpose of the beta reader is to spot any flaws with the plot such as characters who may mysteriously disappear (assuming it’s not a murder mystery novel!), or perhaps a part of the book which just doesn’t make sense.  Maybe they will spot some technical issue – such as my husband when he pointed out that the glass of a Budweiser bottle is actually ‘brown’ and not green! It is a vital part of the writing process.

As writers, we tend to get a little too close to our own work, so having another set of eyeballs on it, is of great benefit. We may not be totally objective, which is not surprising considering the blood, sweat, and tears that go into writing it. So, it is best not to assume that what makes sense to us, will always make sense to someone else. It’s best to iron out these flaws before spending money on an editor. I was lucky to have three beta readers for my latest book.

I won’t deny that it is lovely to hear praise for your work, with comments such as ‘I was really hooked’, or ‘I can’t wait for the next chapter’, but criticism is what is most useful at this stage of writing.  Constructive criticism of course! I know it is the only way to improve my book and get it to the best that I possibly can for the reader.

Being a speaker with Toastmaster’s organisation, I am well accustomed to being ‘evaluated’, and know that it is the only way to improve. The sandwich theory is the best way to give constructive feedback in my opinion. First slice – something positive, then the filling – some form of criticism/suggestion for improvement, and then the second slice ends with something positive.

What you don’t want a beta reader to do

What a writer does not want from their beta reader, is every typo or spelling mistake pointed out – that is a job for the proof-reader.  No, I asked my beta readers some key questions, such as where did they find the story too dull, or too slow. I wanted to know the nitty gritty of their true experience. It is very reassuring in the first instance, to hear that it is ‘readable’ of course!

I couldn’t believe my luck that one of my beta readers is a writer herself. She emailed me two pages of notes with constructive feedback!  It was super helpful, and I am indebted to her!

Having finished the book this week, she mentioned something that I had already suspected: the ending was too weak! After a day of ‘writer’s block’, I set to work and re-wrote another ending. I read this to my hubby as well as sending to the beta reader.  It was a fail! However, after two sleepless nights, I got there with my third attempt. It is quite tricky to give a satisfying ending to a book that is part of a series. It needs to be a complete story within itself, but with suggestion that the story is going to continue.  I think I’ve cracked it!

This is only my second book that I have written, so I’m still very wet behind the ears (whoops! Is that a cliché?). But despite imposter syndrome, and, at times, a total lack of self-belief, I have persevered and believe that I have improved a great deal since my memoir. I can’t wait to see what you think.

I would like to say a humungous thank you to my beta readers (you know who you are!) – your help has been invaluable, and you have played an important part in helping me to get my book closer to the finish line. You will, of course, be acknowledged somewhere within the covers of the new book.

The manuscript is due with my editor (the same lady who edited my memoir), on 10th April.  Meanwhile, I must now endeavour to get on with book number two!  I’m sorry to be a bore, but I will not release book one until book two is almost ready!  There is nothing more annoying than watching a series and having too long a gap in between!