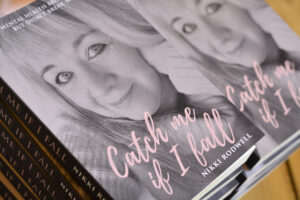 I did a great deal of research whilst writing my memoir ‘Catch Me if I Fall’.  Having never written anything before (other than thank you letters, and Christmas cards), I had a lot of ground to cover, both with grammar and structure.

Something I discovered as a top tip for a great memoir, is to be as open and vulnerable as possible.  I thought this would be easy for me, since I’m a ‘wear your heart on your sleeve’ kinda girl! So off I set with my story, getting right into the thick of things and telling my reader about my episode of psychosis that caused my accident.

However, I hit a bit of a crossroads when I realised that, perhaps, I should disclose the fact I had experienced a few episodes before. But why? The story held together perfectly well without this extra information.  The BWRT treatment which I believed triggered the psychosis on this occasion, explained all the reader needed to know.  They need only ever know that I had experienced this one bout of psychosis. But was I being honest?

My reader would have been led to believe that it was a ‘one-off’ freak episode, and that it had never happened at any other point in my life.  That was still being brave wasn’t it? Why did I have to go a step further and explain about previous episodes.

The reason was because – in my heart, I wanted to be my most authentic and honest self.

But why was it so scary? How come I could open up about the episode that broke my back, but not the previous episodes?  Well, it  was the difference between telling my reader I had been a ‘little’ crazy and I had been a ‘lot’ crazy; mildly cuckoo or batshit crazy!!

And that was when it hit me between the eyes. I had avoided talking about the other four episodes in my life, because of stigma.  I felt so embarrassed and ashamed that I had never been able to talk about it before.

Mental health is well documented as facing endless stigma. Even my own family didn’t send me a ‘get well’ card while I lay in a hospital bed for three months, and then ostracised me when I released my book. I know, had it been my daughter, that I would have been proud of her for facing her mental health issues and standing up to them. The courage and bravery it took to learn to walk again was humbling; but writing the memoir to share with the world?

I was nervous when I released it, mainly because my editor said I may experience ‘trolls’ or people who may stigmatise or ridicule me for the psychosis I so candidly talk about in the book.  But I didn’t care.  I realised that if I could make a difference to just one other person with my book – be it with a spinal cord injury or mental health issue – then it would all be worth it.

From the day it was released, it has been so well received by many and I have no regrets. There was some painfully difficult comments and a shocking review which Amazon thankfully removed.  But these weren’t from strangers, they were from a family member.  Everybody else has given wonderful reviews.  It makes my heart sing when I receive an email from another person who has signed up to my newsletter, telling me they think I am brave and how they enjoyed the book.

Something truly serendipitous (I impress myself sometimes!) that resulted from being brave enough to reveal the full extent of my mental health episodes, is the fact that I finally faced off the demon named ‘psychosis’. It cannot scare me anymore, and I don’t live in fear that it may happen again.  By talking about it, the darkness that surrounded it before has dissipated. 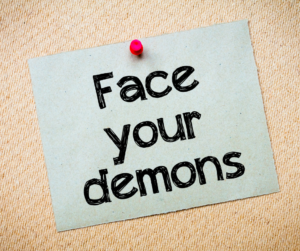 When I am under stress (and believe me, I’ve had more stress in this last year than my entire life), I alert my husband and friends to keep an eye on me.  To better safeguard myself, I speak to the doctor, openly share my thoughts and feelings and generally take better care of myself.

Sometimes, the hardest things we do in life, can really bring the biggest rewards. I would love to know if you have stood up to any demons in your life?