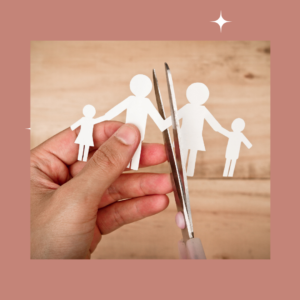 Dysfunctional families have a long-term impact way beyond childhood. How does the old adage go “every generation… blames the one before”. Sadly, the dysfunction often does indeed seep into the continuing generations.

Sometimes you have to divorce your family…

Something I’ve learned on my journey to understand and to heal from a broken family, is that I am not alone. There are so many online discussions with the stories of people who’ve made multiple attempts to repair unhealthy relations and have eventually disowned or broken contact with the very people who raised them; the only way to maintain dignity and respect for one another sometimes is by the painful task of breaking ties to allow one another to have a peaceful and happy life.

But as with all divorces, there is an amicable and dignified way to do this I believe: this is to not apportion blame. Ultimately being happy is more important than being right. Learning to accept people are different is a necessary part of progression and we can only do this by letting go without criticism.

It’s time to be a grown-up

Neuroscience has recently shown that a young person’s cognitive development continues up until the age of 25 with their emotional maturity, self-image and judgement fully formed at this age and the prefrontal cortex of the brain now being fully developed. This is the point where the child should take responsibility for their own life and their own wellbeing and not ‘blame’ anyone or anything for their difficulties.

Likewise, the parents should learn to let go and stop ‘babying’ their child from this age. Let go of their pre-conceived expectations for them and allow them the freedom to spread their wings and fly the nest. A fabulous book that talks about not having these expectations on children is ‘Men are from Mars, women are from Venus, Children are from Heaven – by John Gray’

The Origins of Dysfunction

Dysfunction often comes about due to parental breakups. Bitter or difficult divorces have a lot to answer for, but there can be many other reasons too. This is not a discussion of blame but a few articles of scientific research that I have read and the effects on children’s psychological wellbeing.

From quite early on, siblings in disordered families are often assigned roles as either a scapegoat or a golden child. The golden child seldom suffers consequences for misbehaviour and is often praised and applauded, while the scapegoat shoulders the blame for the family’s dysfunction and suffers the brunt of the consequences. A great article to read on this is here:

The scapegoat is often the first to see the cycle of dysfunction, and this is not going to be greatly received. The scapegoat slowly becomes the ‘black sheep’ and soon realises they are alone, even among their family. Some will continue to try, but many will just walk away from the flock. This is the only way to make sure the toxic cycle doesn’t continue.

Some Signs You Are The Family Scapegoat:

By contrast, it can cause great damage if a parent makes it known that they prefer one child over another. This makes children more likely to develop depression later in life as a result. You would perhaps think that the golden child would benefit from all the positive attention, but that’s not the case; data shows that the perception of unequal treatment has damaging effects for all siblings.

It seems that girls tend to get a raw deal in many households, which can make them feel inferior or neglected. With regards to education, social opportunities, business opportunities or other essential necessities, boys often seem to get preferential treatment over girls, and this bias typically begins at home.

Girls are often greatly criticised for breaking away, especially in certain cultures, but in order for progression, or for the female role to evolve, it is sometimes necessary.

It seems disordered minds struggle to understand boundaries. These are some examples I’ve come across where people feel the older generation fail to respect boundaries:

Not all boundaries were made to be broken!

Always remember a child is not an extension of yourself, and to expect them to conform to your way of thinking and even have similar behaviours and beliefs to you is without doubt narcissistic.

A narcissistic parent sometimes wants the scapegoat in the family to feel the same ‘toxic shame’ or ‘feelings of inadequacy’ that they feel. It can be an ‘unconscious’ act, but nonetheless insidious and damaging.

I confronted my mother…. She gaslighted me, meaning she told me my perceptions were incorrect…. and just sneered, ‘You have a very vivid imagination.’— Misty Kiwak Jacobs

Misty Jacobs talks about how she broke free from a narcissistic mother in this article which has received great praise from others who have experienced similar… https://awordplease.org/tag/self-help/

Some continue to find their parents’ behaviour normal until they marry. Your partner’s perspective can be eye-opening and the first alert to you. They have not grown up with the same manipulations and may be unwilling to participate in the dysfunction that feels so natural to you. The parent who has always wanted to control you in some way to their advantage will not like someone else now being involved.

As a favoured child you will find your partner may become the new favourite in smear campaigns, and petty criticisms designed to either force them into compliance or get rid of them entirely via divorce.

As the ‘black sheep’ in the family your new partner may be expected to see you in the same light as them, perhaps being poisoned with their views to try and get them on side. This is usually to no avail since someone from outside will cotton on to this tactic.

Parents must respect their adult children but also their spouses too, regardless of whether they like them or not. You do not get to choose whom your children love. Whether you want to admit it or not, you are not—nor can you ever be—the most important person in your adult child’s life at all times.

A disordered parent sees their child as an extension of themselves, not as an individual, and grandchildren are but one more step on the ladder of “me.” The following clarifies what is not okay in the role of grandparenting…

The older generation must learn the difference between parenting and grandparenting. Your days of making all the decisions are over. In this new chapter of your life, your role is to give unconditional love and guidance, but remember it is a privilege, not a right. A grandchild is not your prodigy, nor are they your property. Be thankful for the time you are given, but show respect to the parents first and foremost in order to teach and demonstrate to the grandchildren the correct order of things. Don’t create a gap.

Albert Einstein states that the definition of insanity is doing the same thing over and over again and expecting different results. This applies to the relationship you might have with your parents. You’ve been running for years and yet you’re still in exactly the same place that you were as a child. You may have even changed yourself along the way, but so fixed are the parents’ beliefs it will make no difference and even be passed on to your own children.

I am one of those people who recognized all too slowly the ongoing effects of a very dysfunctional family unit. Even when having it pointed out to me and giving second/third chances, I still couldn’t take the final step of “breaking up” and divorcing the family unit. Thankfully that has been taken care of now, and whilst I’m sad to come from a broken family and wish it was different, it isn’t. It is what it is.

There are so many other topics out there on dysfunctional families, I’ve only scraped the surface with the topics here. But if you realize it may be time for you to get off the hamster wheel, know that you are not alone, there are many others and some great articles if you do some research.

It is the apex of self-care to remove yourself from the presence of a person actively opposed to your happiness. And it is the path to wholeness.